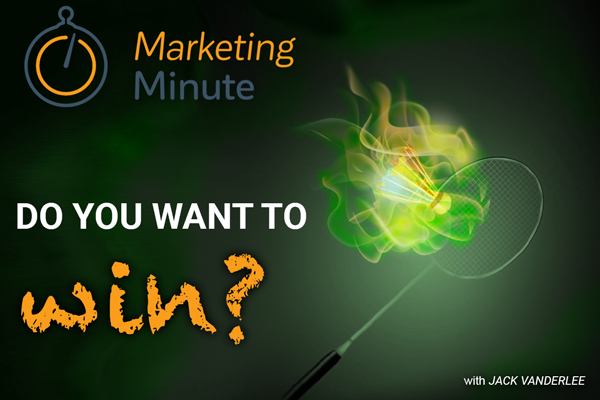 As some of my readers and viewers may already know, I recently tore my Achilles into two. It hasn’t been exactly smooth sailing being on crutches everywhere I go, but this whole situation has taught me a valuable lesson about winning. And of course, marketing.

Let’s start with what happened.

I simply wanted victory so I stepped up my game…
I was balancing on the balls of my feet, letting my body move as intuitively as I could.

Adrenaline was pumping through my veins, my heartbeat increased significantly, and I was sweating profusely. It was the 4th set of my weekly badminton game with my son Joel. I had won one set but he had two under his belt already. I began to push myself: “Keep your eyes on the target. Failure is not an option!”

When I leaped off the ground to reach the shuttle (coming down in an impossible corner, thanks a lot Joel) I completely tore my left Achilles Tendon into two pieces.

My leg felt like it was hit by a bullet. I fell to the floor clasping my foot and watched the muscles in my left calf spasm unnaturally in a last hysterical dance before giving way to an overwhelming paralysis of my entire left lower leg and foot.

This was one of those times where I probably pushed it too far. Though we’re close in skill (not to brag), there’s about 30 years between my son and I. No wonder he has the physical advantage.

Nevertheless, needing to win is in my blood. I always want to win for my family, my company, my team, and … our clients. I think there’s nothing wrong with that. But the big lesson in this is that (at this age) maybe I should have tone it down a bit.

That’s what I’m asking myself now: “Why Jack?’ Was it worth it?”

The answer: “Definitely! Though I found my limit the hard way, life isn’t going to slow down either.

Never fight the battle if you don’t want to win.

Do what it takes. I’ll get back on my feet in a few months and I’ll beat Joel at our next game.